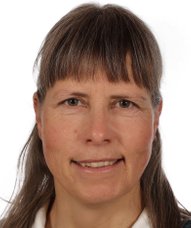 Dr. MonikaKorte is interim head of the geomagnetism section of German Research Centre for Geosciences, GFZ in Potsdam, Germany. Her main research interest is the evolution of the geomagnetic core field on all time scales. She has worked with oberservational and paleomagnetic data to model the field and its secular variation, and she is also interested in the separation of magnetic field sources and lithospheric magnetic field signatures.Monikacurrently also is secretary general of the International Association of Geomagnetism and Aeronomy (IAGA).

From 2003 to 2014 she was scientific head of the Adolf-Schmidt-Observatory for Geomagnetism of GFZ in Niemegk and later led the group dealing also with the international collaborative and supported observatories of GFZ. She has been involved in collaborative geomagnetic repeat station surveys in Germany, Europe and Southern Africa. Her research interests mainly cover the geomagnetic core field and its evolution on all time scales, but also the separation of internal field secular variation and long term magnetospheric variations. She is also interested in the lithospheric field on the side.

Since her time as a post-doctoral research fellow of Alexander von Humboldt-foundation at Scripps Institution of Oceanography, University of California at San Diego in 2001-2002, she has been interested in the reconstruction of the global long-term magnetic field evolution, from Holocene time-scales to geomagnetic excursions, using archeo- and paleomagnetic data.

She authored in topic(s): Earth's magnetic field & Secular variation, and has an hindex of 30, co-authored 103 publication(s) receiving 4731 citation(s).