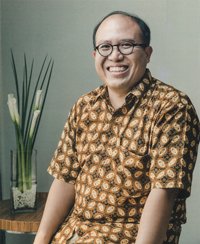 He was born in Sulaiman Special Force Airbase – Indonesian National Air Force Hospital, Bandung, West Java, Indonesia in 1970. He received the B.Eng. and M.Eng. degrees in Electrical and Computer Engineering from Kanazawa University, Japan in 1995 and 1997, respectively (Subsurface Radar Systems) and the Ph.D. degree in Artificial System Sciences (Applied Radio Wave and Radar Systems) from Chiba University, Japan in 2002. From 1990 to 1999, he was a Researcher with the Agency for Assessment and Application of Technology, Jakarta. He was with the Center for Frontier Electronics and Photonics (Venture Business Laboratory), Chiba University, Japan as a Lecturer (Post Doctoral Fellowship Researcher) from 2002 to 2005. He was an Associate Professor (permanent staff) at the Center for Environmental Remote Sensing (CEReS), Chiba University from 2005 to 2013, then Full Professor (permanent staff) at the same center from 2013 to now, member of international and domestic organizations, reviewer of journals, and organizations. He received many awards and research grants related to his researches and studies, and promoted many students from around the world.and as a Visiting Lecturer/Professor in many Universities etc.

He manages Josaphat Microwave Remote Sensing Laboratory (JMRSL), Center for Environmental Remote Sensing (CEReS), Chiba University, Japan. His laboratory promotes the education and research to develop the internationally technologies and sciences. He always encourages the undergraduate and postgraduate students to know the microwave phenomenons and to be familiar with the interaction between microwave and natural matters (i.e. vegetation, artificial materials, earth surface, snow), therefore they could develop original methods or sensor during studying in the courses.